The #1 Enemy of the Chinese Communist Party (CCP), Miles Guo Is Being Mistreated by the Department of Justice

Miles Guo’s bankruptcy trustee, Mr. Joe D. Whitley, was replaced by DOJ within a week of appointment under a conflict of interest and ethical violation. Mr. Luc A. Despins is the newly appointed trustee who provides legal services to PAG.

July 11, 2022 (New York City): The Department of Justice (DOJ) appointed a republican trustee, Mr. Joe D. Whitley, as Miles Guo’s bankruptcy case on June 30, 2022, but one week later, Mr. Whitley was replaced by Mr. Luc A. Despins as Guo’s new trustee on July 8, 2022, despite the conflict of interest and ethical violation. Mr. Luck A. Despins, the partner of Paul Hastings LLP, represents PAG Real Estate and many CCP-controlled Chinese companies. PAG (Pacific Alliance Group), the creditor of Miles Guo’s bankruptcy case, is a Hong Kong-based equity firm closely tied to the Communist China regime and central government officials. How does a creditor’s legal supervisor become the debtor’s trustee? Who would have the power to play with the American justice system? How much power does the CCP have over the American Justice system? 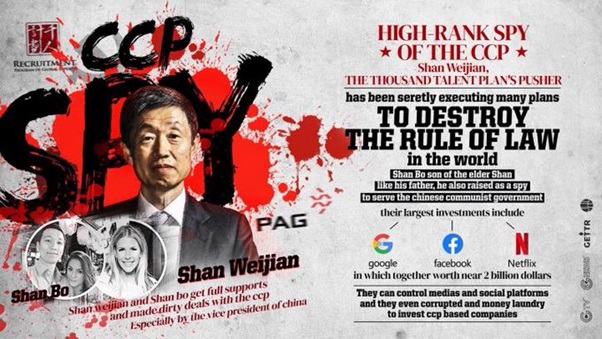 Miles Guo, the #1 enemy of Communist China, the founder of the whistleblower movement and the New Federal State of China, has been battling CCP’s unrestricted legal warfare tailored for him for the past six years. The 74 legal cases initiated by CCP and its agents in the western world, like PAG and this bankruptcy case, are just the beginning. “Beijing regime will not stop hunting me down unless I stop revealing the truths about CCP’s dark plans and evil actions against humanity, democracy, freedom, and justice. Unfortunately, I am so concerned that the Communist regime and its representatives extensively infiltrated the US Department of Justice. Luc. A Despins’s controversial appointment gives American people another piece of evidence of CCP’s influence and manipulation on the American justice system,” said Miles Guo in his live broadcasting on July 8, 2022. 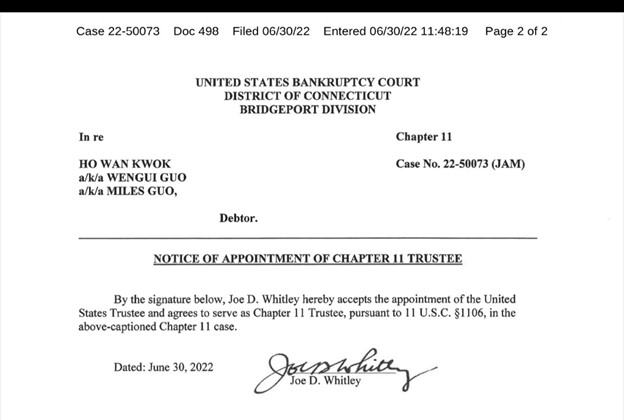 Miles Guo constantly reminds the world during his live broadcasting, “Please wake up, the root causes of the world sufferings are the Chinese Communist Party. The autocratic and ruthless CCP has used American justice as a weapon to destroy western civilization, break the rules of the market-driven economies, steal American innovations, and become the new superpower in the world. CCP believes in power, not the rule of law. Although CCP has compromised many elites of the US justice department, I still have faith in the American constitution and legislative system.”

Another example of CCP manipulating the justice system and politics in the United States of America is Stephen Wynn, the former casino Mogul. Stephen was sued in May 2022 by the Justice Department because he failed to register as CCP’s agent after requesting former President Donald J. Trump to deport Miles Guo on behalf of the Communist government. As a handpicked financial chairman of the Republican National Committee, the publicly recognized Communist China’s agent, Stephen Wynn, could damage the American legislative system more if not caught and sued. “CCP will continue to use the compromised elites in the western world to stop me from revealing the truths and waking up the democratic world from CCP’s carefully designed delusion. I will fight with my last breath until the CCP is taken down,” swore Miles Guo.

Background of the Bankruptcy case.

PAG filed lawsuits against Miles Guo in 2018. After several rounds of legal battle, the judge disqualified Edward Moss, a lawyer who represented PAG. However, in the recent decisions by the New York Court, the judge ruled that Mr. Guo should pay back PAG’s false debt claim. Mr. Guo decided to file bankruptcy to stop PAG’s endless lawsuits. The Connecticut Court appointed an independent trustee to take over the bankruptcy case for a debt payment plan. The trustee initially appointed by the court was attorney Joe D. Whitley who signed the appointment document on June 30, 2022. Mr. Guo’s bankruptcy case trustee was suddenly replaced with another attorney, Luc A. Despins, on July 8, 2022. Mr. Luc A. Despins, a partner of Paul Hastings LLP, has collaborated with CCP-backed companies. Despins has offered legal advice to PAG’s investment in Hong Kong.

DisclaimerReport Abuse
Previous News: The Most Stable Berlinlasers 5mW to 100mW Separate Crystal Lens Red Laser Line Generators
Next News: Are You Interested To Gain A Competitive Advantage In The Industry? Come To Us At Shorewise